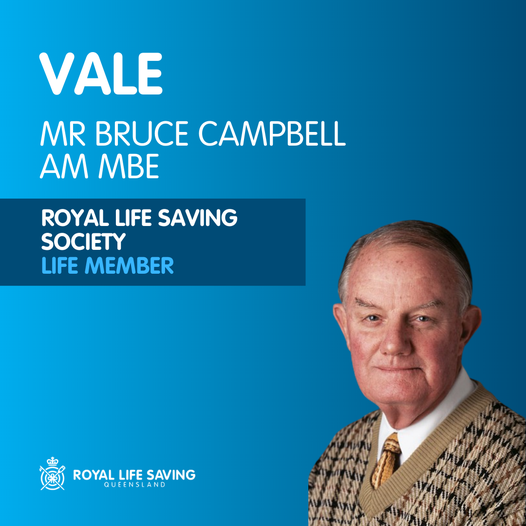 Royal Life Saving Society – Australia is deeply saddened to learn of the passing of Mr Bruce Campbell AM MBE.  Mr Campbell was a life member and past President of RLSS Queensland.

Bruce Campbell grew up in Longreach, QLD, where he learnt everything about swimming in the Thomson River. In 1948 he moved to Brisbane, and was invited by a close friend to visit their Life Saving Club – Metropolitan Caloundra. Bruce joined the club after finding the experience “infectious” – not realising at the time the extent to which it would impact on his life, and that of many others. He described the world of lifesaving as “replete with unforgettable experiences and strong friendships and a part of my life in which I found myself associating with an army of committed volunteers at least equal to the finest in the country“.

Speaking on behalf of the RLSS QLD Board, current President Mr Les Mole said “After years of active service, participating in an array of society competitions – both pool and beach, seeing the progression of numerous lifesaving techniques and equipment, overseeing the society as President and so much more, Mr Bruce Campbell will be remembered as a leader and friend”.

Mr Campbell was a great champion for rural communities in Australia. He organised Australia’s Year of the Outback in 2002, a highly successful initiative that celebrated the community spirit of country Australians. In recognition of this lifelong contribution to so many community causes, he was made the Australian Senior of the Year in 2003.

K.M.Smith Funerals will be holding a livestream to the funeral this Saturday the 27 November 2021 commencing at 10:30am.